Brock Osweiller Quarterback of the Cleveland Browns went into preseason as the starting Quarterback. The Brown acquired Osweiller through free agency and paid a healthy price. While certainly not a franchise Quarterback he has real time experience as a starting QB with 13-8 record in the regular season and 1-1 in the playoffs 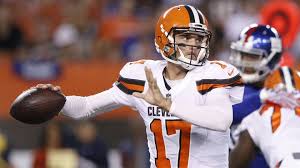 There is no question Deshone Kizer is the Quarterback of the future. He’s big and smart and is poised beyond his years. He allows the Browns to do more things as a result of his mobility. That said he is a 20 year old kid. He needs time to grow and learn. Starting a rookie on a team that’s a perennial loser without an proven running game and a starting Offensive line loaded with rookies is asking to much of a rookie. Additionally the Browns schedule is Brutal with 3 of the first 4 games divisional games

I am confident in Hue Jackson however let this kid sit for at least half a season and let him watch and learn. Starting him now has the potential to ruin his self confidence and waste a potential franchise Quarterback of the future.